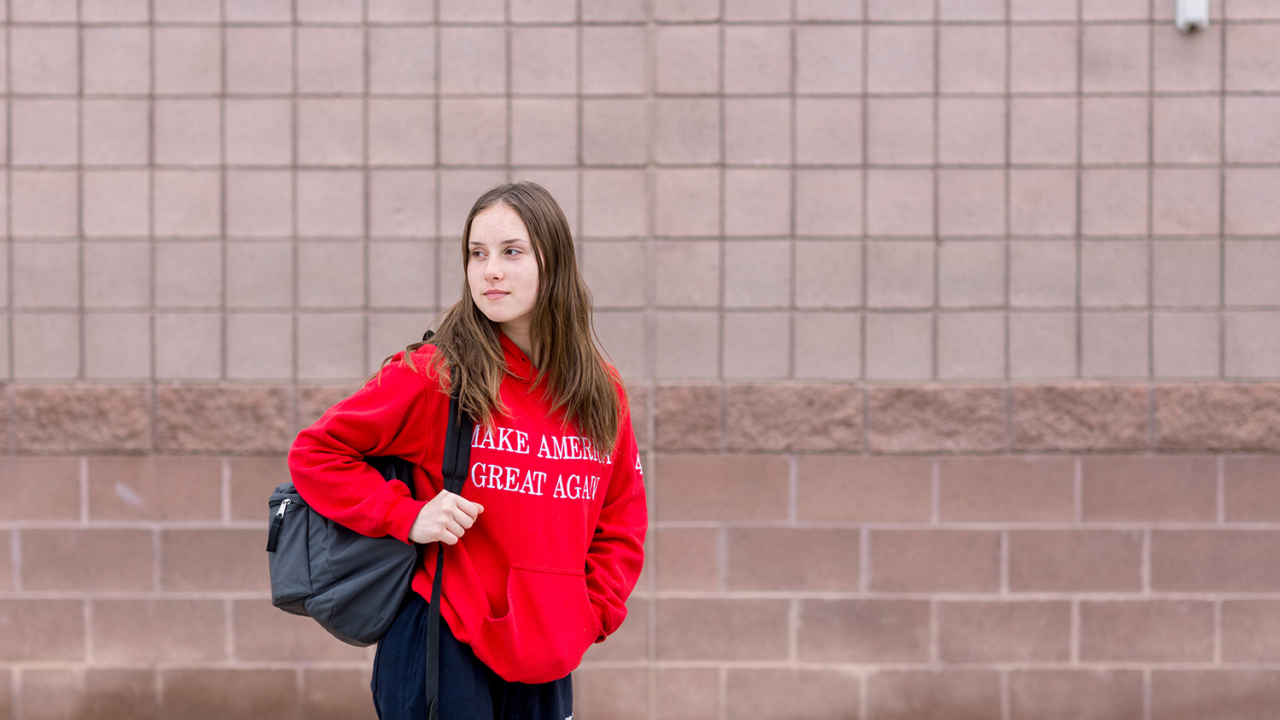 It has become an all-too-familiar scene on public high school and college campuses.

That is exactly what played out at Perry High School in Gilbert, Arizona just last Friday.

Perry High School administrators suspended student Logan Jones when she and a friend wore Make America Great Again (MAGA) sweatshirts to school on “Party in the USA Day,” as part of the school’s Spirit Week. The two stayed after school hours to take some pictures displaying a pro-Trump MAGA banner in an outdoor common area of campus. As they were taking pictures, a school resource officer approached them and ordered them to leave, telling them that they could take any questions they had to Assistant Principal Heather Patterson.

The two students did as they were told. But as they began to pack up and leave campus, the officer followed them and took pictures of them. Then, the officer asked for Logan’s name – who inquired why that information was needed since they were following the officer’s orders without protest.

That’s when the officer directed them to go to the office to speak with Patterson.

Again, the students did as they were told. On the way, Logan called her mother, who told her to wait until she got there to speak with anyone.

When Logan’s mother arrived, she began talking with Patterson about the situation. After a few minutes, Principal Dan Serrano came out of his office and said, “I am tired of hearing this. Logan Jones, you are suspended for 10 days. Get off of school property.”

Video recording also indicates the hostility that school officials displayed towards the messages expressing support for President Trump and his MAGA slogan. And there is evidence that at least one other student has also been punished for expressing similar messages.

Students who attend public school are protected under the Constitution, and school officials should be safeguarding those rights on campus. And that is clearly not the case at Perry High.

Alliance Defending Freedom attorneys with the Center for Academic Freedom quickly came to Logan’s aid, firing off a demand letter to allow her back to school. While Principal Serrano allowed Logan to come back to school, he still refuses to take the suspension off Logan’s permanent record – even though the suspension is based on Logan exercising her First Amendment freedoms.

No matter what you think of the president, we should all agree that public school officials have a duty to protect their students’ freedom of expression – a freedom guaranteed by the First Amendment.

There is a fundamental principle at stake here: Though we may disagree with what a person says, we should defend their right to say it. That is the mark of a truly tolerant society.

Principal Serrano should understand that principle.

Instead, he is showing the students at Perry High that the proper way to deal with viewpoints you oppose is to silence and punish them. That is not how the Constitution works.

School officials should be working to educate their students on how the First Amendment works – not indoctrinating them with their favored viewpoints. And the ADF Center for Academic Freedom will continue to work to ensure that Perry High is a campus that respects the Constitution.