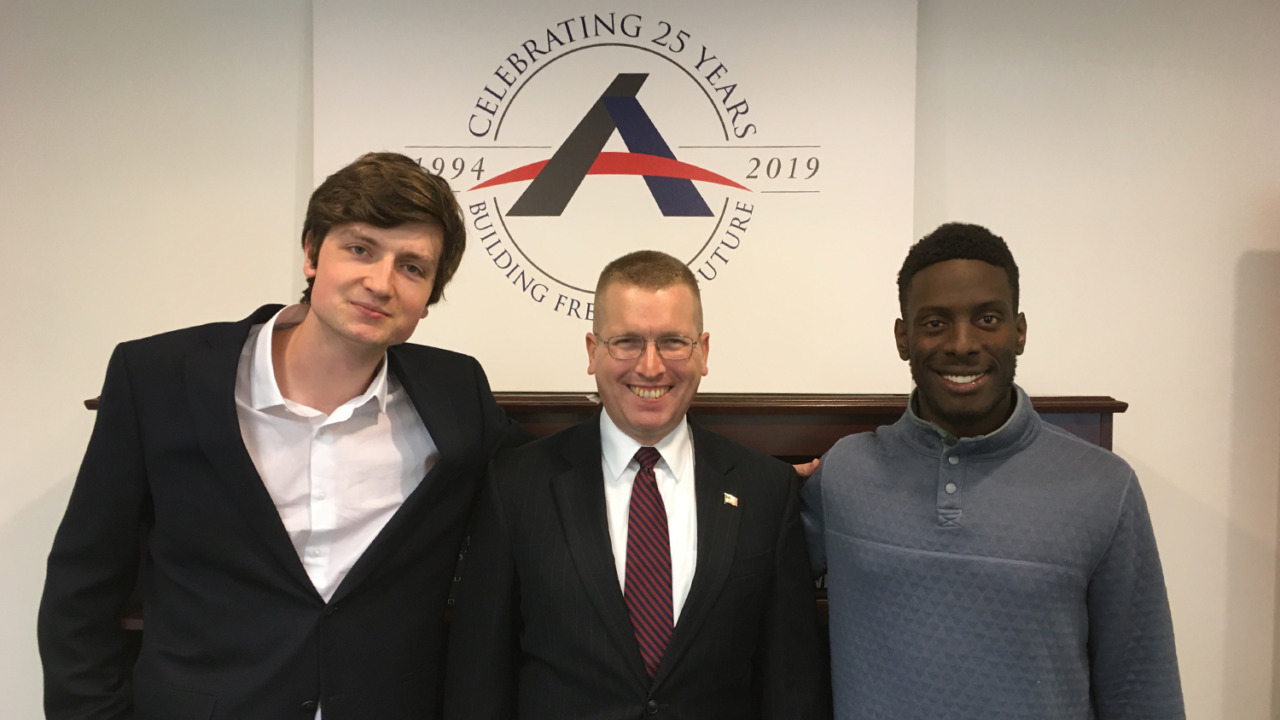 Chike Uzuegbunam never thought his time in college would lead him to the steps of the U.S. Supreme Court. But that’s exactly where he finds himself after his alma mater, Georgia Gwinnett College, silenced his speech and forced him and Alliance Defending Freedom to file a lawsuit.

Today, Chike asked the Supreme Court to hear his case.

Chike’s legal journey began in 2016. He wasn’t doing anything that you would expect to be controversial. He was simply handing out pamphlets in a plaza on Gwinnett’s campus and talking about the Gospel with interested students as they passed.

It’s not unusual to see college students promoting their cause of choice, interacting with their peers, putting up flyers, or handing out pamphlets. That’s what makes the modern-day university a “marketplace of ideas”—where students are exposed to diverse opinions, encouraged to debate their positions, and form their worldviews. That’s the beauty of free speech in higher education.

But not, unfortunately, at Gwinnett.

College officials approached Chike and ordered him to stop handing out pamphlets and sharing his faith. According to these officials, Chike was not allowed to engage in these activities unless he reserved in advance a time block in the campus “speech zone.”

“Speech zones” on college campuses are peculiar for institutions that are supposedly designed to welcome diverse speech. They are small, designated, and often out-of-the-way areas of campus that students must reserve in advance to exercise their right to free speech.

Some college officials say that these zones protect students’ First Amendment rights. But the opposite is actually true. Free speech should never be restricted to a certain area of campus, on certain days of the week, and at certain hours of the day. Public university campuses—especially the outdoor areas of those campuses—ARE free speech zones.

Unfortunately, Gwinnett’s violations of Chike’s free speech rights were just beginning. Here are a few things you need to know about Chike’s case:

In fact, to call them “tiny” would be an understatement. Combined, the two Gwinnett speech zones made up only 0.0015 percent of campus.

To use Gwinnett’s speech zone, a student had to make an advance reservation. But the zones were only open for student use 18 hours during the week and were closed on the weekends. That’s about 10 percent of the week!

Despite these unconstitutional restrictions, Chike tried to persevere and share his faith. He reserved a speech zone and began sharing the Gospel there during his reserved time. This time campus police ordered him to stop speaking because they had received complaints from other students that Chike’s message made those students feel uncomfortable.

4. According to Gwinnett, no one is free to share their faith on campus.

Under the Student Code of Conduct, Gwinnett officials classified Chike’s peaceful speech as “disorderly conduct,” defined as any speech “which disturbs the peace and/or comfort of person(s).”

And after Chike sued, Gwinnett argued that Chike’s speech—discussing the basic tenets of the Christian faith—“arguably rose to the level of ‘fighting words,’” a category of speech that the First Amendment does not protect.

Gwinnett’s position is disturbing. If sharing the Good News that Jesus died for our sins is “disorderly conduct” and “fighting words” on campus, it is the same off campus—even in your own church.

5. While the college eventually changed its speech zone policies – Chike never got the justice he deserved.

ADF tried to work with Gwinnett to enact lawful policies regarding free speech on campus. The college ignored the advice and unilaterally changed its policies in an effort to end the lawsuit. Because of that change, and because Chike is no longer a student, a federal court dismissed his case. But that doesn’t change the fact that college officials violated Chike’s right to free speech by silencing him not just once, but twice. That’s why this lawsuit continues. ADF is asking the Supreme Court to make clear that public universities cannot violate the First Amendment rights of their students and get off scot-free.

6. The federal government has voiced its support for Chike.

In September 2017, the United States Department of Justice filed a brief supporting Chike’s right to free speech on campus: “Colleges and universities must protect free speech and may not discriminate out of a concern that listeners might find the content of speech offensive or uncomfortable.” The federal government is correct, and we are hopeful the Supreme Court will agree.

“Free speech” is not free when a college requires a student to obtain advance permission, speak during certain hours, and do so in a microscopic portion of campus. And college officials should never classify speaking about the Bible as “disorderly conduct” or “fighting words.” The only permit a student should need to speak on his or her own campus is the First Amendment.

Please join us in praying that the Supreme Court agrees to hear Chike’s case and gives him the justice he deserves.